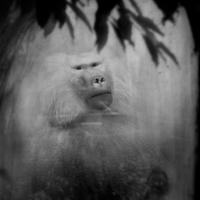 
Everything is in the space of an “almost”. The primates are almost human, they share almost all their DNA with humans and are able to behave almost like human beings. But primates are something different. It’s in view of this closeness to humans that they are different and that is what makes them special. The minimal space that stays suspended in the “almost” can host profound emotions and meanings.

“The eyes of an animal when they consider a man are attentive and wary. The same animal may well look at another species in the same way. He does not reserve a special look for man. But by no other species except man will the animal’s look be recognized as familiar. Other animals are held by the look. Man becomes aware of  himself returning the look. The animal scrutinizes him across a narrow abyss of non-comprehension.” [John Berger, About Looking]

The interstation of “almost” is the place for the reciprocal look: a narrow abyss of non-comprehension that can be filled with fear or attraction, of empathy or need of appropriation, of sense of superiority or sense of guilt.

In front of the primate portraits of Anne Berry we are forced to confront the look that on one hand surprises and interrogates us and on the other hand makes us realize that it is exactly our gaze that helps construct meanings by projecting on the primates our intentions, feelings, roles that really are human. There is something that eludes us in the plastic pose of a baboon or in the seraphic gesture of a macaque, something unattainable that does not find a place in our taxonomies, made up of science and common sense. From here come the hesitation and the fascination with those creatures:  “especially able to remind people of the undeniable bond between man and animal.”  [petapixel.com]. This bond has become the focus of interest of philosophers and scientists, besides artists, in search of the soul of animals, carried out in mental speculations or lab experimentations. From Aristotle’s History of Animals through the many experimenters of the 18th century to the cognitive ethology of David Griffin, the unattainability of animals has continued to be a never resolved mystery. In the words of Jung, who dedicated a great part of his work to the dichotomy of anima/animus:

“When the great night comes, everything takes on a note of deep dejection, and every soul is seized by an inexpressible longing for light. That is the pentup feeling that can be detected in the eyes of primitives, and also in the eyes of animals. There is a sadness in animals' eyes, and we never know whether that sadness is bound up with the soul of the animal or is a poignant message which speaks to us out of that still unconscious existence.” [Jung, Dreams, Memories, Reflections]


Anne Berry brings us to the intricate jumble of nature and culture without insisting on erudition or quotation. The images put together by the photographer are “gifts given by the primates” that take place unexpectedly, through an elegant pose or a striking gesture after long periods observation and mutual rapprochement. Anne Berry’s photographs are made of the matter of “almost”, uncertain and sensual, they don’t focus on the surface but are a tool to probe some moving depths; they are devices pointed towards the animals in captivity to “hear their inner sound, and to consider their value and their place in the world.” [your website]

Anne Berry finds animals that are “almost free” that can almost touch you, but they are Behind Glass. So everything becomes enveloped in a patina of desire and nostalgia, made even more evident by the use of a technique that references pictorial and photographic art from the end of the 19th century and the beginning of the 20th. In her photographs one can notice Franz Marc’s pantheistic vision and “animalization of art”, the evolved primitivism and tangible dream of Marc Chagall, the experimental photogravures of Robert Demachy. All this is not obvious, as there are no direct quotes, but instead an accumulations of layered meanings over time. Yet first of all, these photos contain the grace offered by animals  to the gaze of a photographer. Both photographer and primates are separated by a glass and a lens: Behind Glass, almost in contact – “almost”.

However, the emotional tension and the intimacy of these images are not closed in a private dimension. “Emotions must push more than they should move”, she affirms, and points out explicitly the “political” goals of her project: “I am interested in instigating photography projects that assist conservation and animal causes”. And that’s how the jumble of nature and culture becomes even more intricate and inescapable. The meaning of these photographs is not exhausted in the pure contemplation of the mystery behind the gesture of a primate but becomes affirmation and defense of a purely human value. The defense of a mystery, of an enigma, of a relationship that refers us back to the dawn of life. But most of all, the defense of the otherness of animals that keeps us human. The tireless defense of “almost” against any desire for domination and control of everything.