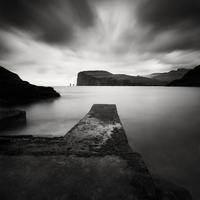 Håkan Strand is an award winning Fine Art Photographer based in Stockholm, Sweden. He brings his Scandinavian influences into his photography to create a style which is characterized by sophisticated simplicity of form, beauty and lines. By making use of low light environments, between dusk and dawn, bad weather and gray cloudy skies, the artist is able to create his elegant and atmospheric black and white photographs.

Håkan Strand is represented in galleries around the world and widely published all over the globe. He has received several international awards for his photographic work. He was awarded 1st prize in the Prix De La Photographie in Paris, France, 2007, for hisWaterfront Studies. This series was also selected as Best of Show by Anthony Bannon, Director of George Eastman House in Rochester, NY, USA. Håkan was a Merit Award Winner in Black and White Magazine, UK, 2008. He also received Merit of Excellence in the Black & White Spider Awards, 2008, and an Honor of Distinction in the Black & White Spider Awards 2010. The same year he was awarded 1st prize by IPA, International Photography Awards in the USA.