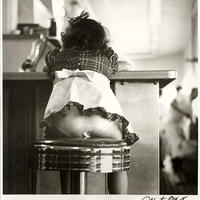 Martin Elkort is an acclaimed black and white street photographer whose work regularly appears in major publications, galleries and museums in the United States.

His early black and white photography work, c.1945 to 1956, features the fabled Lower East Side of New York City, with its polyglot ethnic populations, the myriad streets and alleys of the city, and the Coney Island amusement park in Brooklyn.

He studied fine arts at The Cooper Union Art School, the Art Student's League, and the Pan-American School of Art in New York and worked in advertising art and photography. Elkort credits his graphic arts studies with sharpening his eye for photography. He also studied with individual photographers such as Aaron Siskind, Paul Strand, Lou Stouman, Imogen Cunningham and others at the Photo League in New York and other venues. Early on, photography came to dominate his interests and he has been taking pictures ever since.

Today he can often be found wandering the ethnic neighborhoods of Los Angeles or San Francisco with his cameras, following his lifelong mission documenting, through black and white photography, the life of the streets.