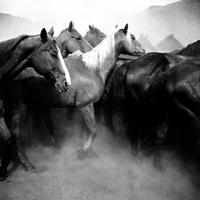 Adam Jahiel is an internationally recognized photographer who lives and works in the American West. Mostly known for his photography of the American Cowboy, his photography has taken him all over the world. His poetic and dynamic images have been exhibited and published across the globe. In 1996, he became the first living photographer to have a one-man show at the Buffalo Bill Historical Center, in Cody, Wyoming. His photographs are in the collections of the Nevada Art Museum in Reno, the Art Institute of Chicago, the Museum of Fine Arts in Boston, as well as private and corporate collections. Adam has had a varied professional career. He has worked for the motion picture industry, and adventure projects, most notably as the photographer for the landmark French-American 1987 Titanic expedition.

His work has appeared in most major U.S. publications, including Time, Newsweek, The New York Times, National Geographic, Smithsonian and countless others.