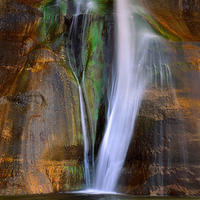 Just before leaving for two years of graduate piano study at the Eastman School of Music in Rochester, New York, I visited Yosemite National Park for the first time. This was my first real camping trip—and it was a revelation. In the tiny practice rooms at Eastman, I kept dreaming of the wide-open spaces of the Sierra. George Eastman, the founder of the Eastman School of Music, also founded a company named Kodak, which was headquartered in Rochester. Thus, the public library there had a superb photography section. This was where I searched for Yosemite books, and discovered Ansel Adams. Adams himself trained as a pianist, and later turned to photography. I had spent many hours in my father's darkroom, and enjoyed making "happy-snap" prints of friends. But I never realized that photography could also be an art form....
Another revelation was a trip a few years later to the Center for Creative Photography in Tucson, Arizona. With a pair of white gloves, one was free to look through boxes of prints by masters like Edward Weston, Jerry Uelsmann, and Ansel Adams. I especially remember holding in my hands the prints from Ansel's Portfolio Five. I had never seen prints like these before—so brilliant that I felt I needed sunglasses! I wanted to be able to make prints like this, prints that glowed from within.

Adams described printmaking in musical terms: "the negative is the score, and the print the performance." I immediately understood the analogy. Playing classical piano involves starting with a score (often hundreds of years old), and trying to bring it to life. Imagination is important, as there are countless decisions about how best to imbue these notes with emotion. It's the same thing in making a photographic print.... There are many choices in shaping the image into its strongest and most compelling presentation.
There does seem to be some connection between music and photography. You see it with George Eastman, and with many contemporary masters like Paul Caponigro, Don Worth, Huntington Witherill and others. Although I didn't have what it took to be a concert pianist, I still enjoy playing, and have given recitals at the homes of Don Worth and, a year after Ansel's death, Virginia Adams (that's me and Virginia before the recital, with Ansel's beloved Mason & Hamlin piano in 1985).

I originally started making black & white prints, but was soon drawn to experiment with color. Color printing in the late '70s was fairly primitive, but there was one process with a mythical reputation that offered tremendous control—dye transfer. I had no idea how all-consuming making dye transfer prints would be! To create one print required the precise exposure and development of approximately twelve sheets of film. The colors are literally disassembled into B&W, and then reassembled in a process akin to silk-screening. With all the steps involved, it offered tremendous control—but also the possibility for things to go terribly wrong. I labored mightily for more than fifteen years with dye transfer. When all the planets aligned, a beautiful print could emerge. But you didn't know how it would look until the final step of "rolling" out a print (I'm rolling the final yellow matrix here). I go into more detail on the joys and frequent sorrows of dye transfer printing on this page, making a dye transfer print.
I've spent the majority of my time in photography learning all I can to create beautiful prints. Prints that are brilliant (sunglasses optional), and prints that are more subtle and quiet. Making prints has been my obsession.

One of the students in my dye transfer workshop of 1989 was Bill Atkinson, who eventually introduced me to making prints digitally. Bill knew in 1989 that there had to be a better way to make prints, but it took until around 1996 (with the invention of the "Lightjet" digital enlarger) for all the pieces to come together. There was a steep learning curve, with scanning and Photoshop, but it soon became clear that digital allowed ultimate control over the final print—I'm convinced Ansel would be pleased! I'm proud to say that my image "Snow-covered Trees, El Capitan" was the first digital print the Ansel Adams gallery sold, back in 1997. We tried not to say the "D" word (digital) back then, but digital printing is now almost universally accepted. Even though some people believe "they don't make them like they used to", I can now make prints that are sharper, last longer, and with more accurate colors than I ever could with the dye transfer process. Viva La Revolución!