Catherine Couturier Gallery is delighted to debut the latest body of work by gallery artist Rachel Phillips, entitled Ghost Light Theaters. The artist will be in attendance at the opening reception on Saturday, February 23rd from 6-8 p.m.

Rachel Phillips is a California based fine art photographer who is best known for her unique approach the medium of photography. In her most recent project, Ghost Light Theaters, Rachel Phillips explores the mysterious tradition of a “ghost light” in a series of hand-crafted, tabletop theater lanterns. Created to resemble those produced by Treadwell Press in the 1930s, each one of her Ghost Light Theaters features a beautiful Art Deco exterior, a single electric bulb, and a series of interchangeable slides that play out a narrative authored by Phillips. To create these slides, she transforms snapshots by layering them with paper silhouettes. Combined with a brief narrative intertitle, each of her montage sequences captures the “ghost of a moment”—those fleeting memories or experiences that can only be preserved and shared though photography.

The architecture of Ghost Light Theaters pays homage to the golden age of Art Deco movie palaces, temples from a time when most Americans "went to the pictures" at least once a week. The series also exemplifies the ways in which a movie theater is like a living, inhabited camera—both dark spaces to record the play of light and shadows projected within.

A "ghost light," a single bulb left illuminated when a theater is unoccupied and would otherwise be dark, is said to allow the resident ghosts to perform onstage when all the living inhabitants have finally left for the evening. This alchemy of stories enacted in the dark, organized around a single, focused light, also bears a striking resemblance to the magical picture forming that happens behind the eternal eye of the lens, in the perfect dark of a camera.

The imagery for Ghost Light Theaters consists of interchangeable slides printed on handmade Japanese paper. Envisioned as three film stills from a silent movie, each sequence is accompanied by a brief intertitle hinting at narrative. These montage sequences are composed from layers of vernacular snapshots and silhouettes of paper figures meticulously cut and photographed in the studio—ghosts. 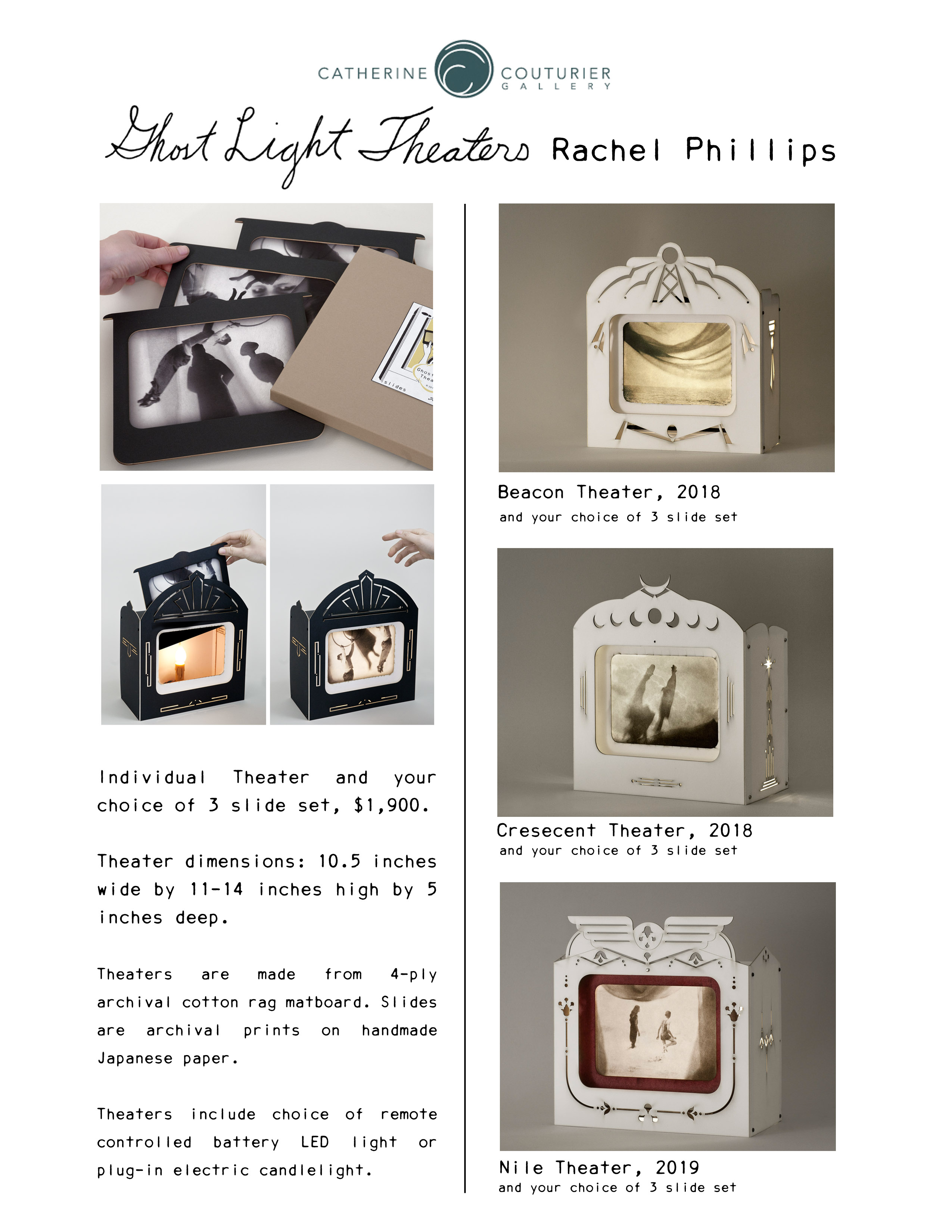 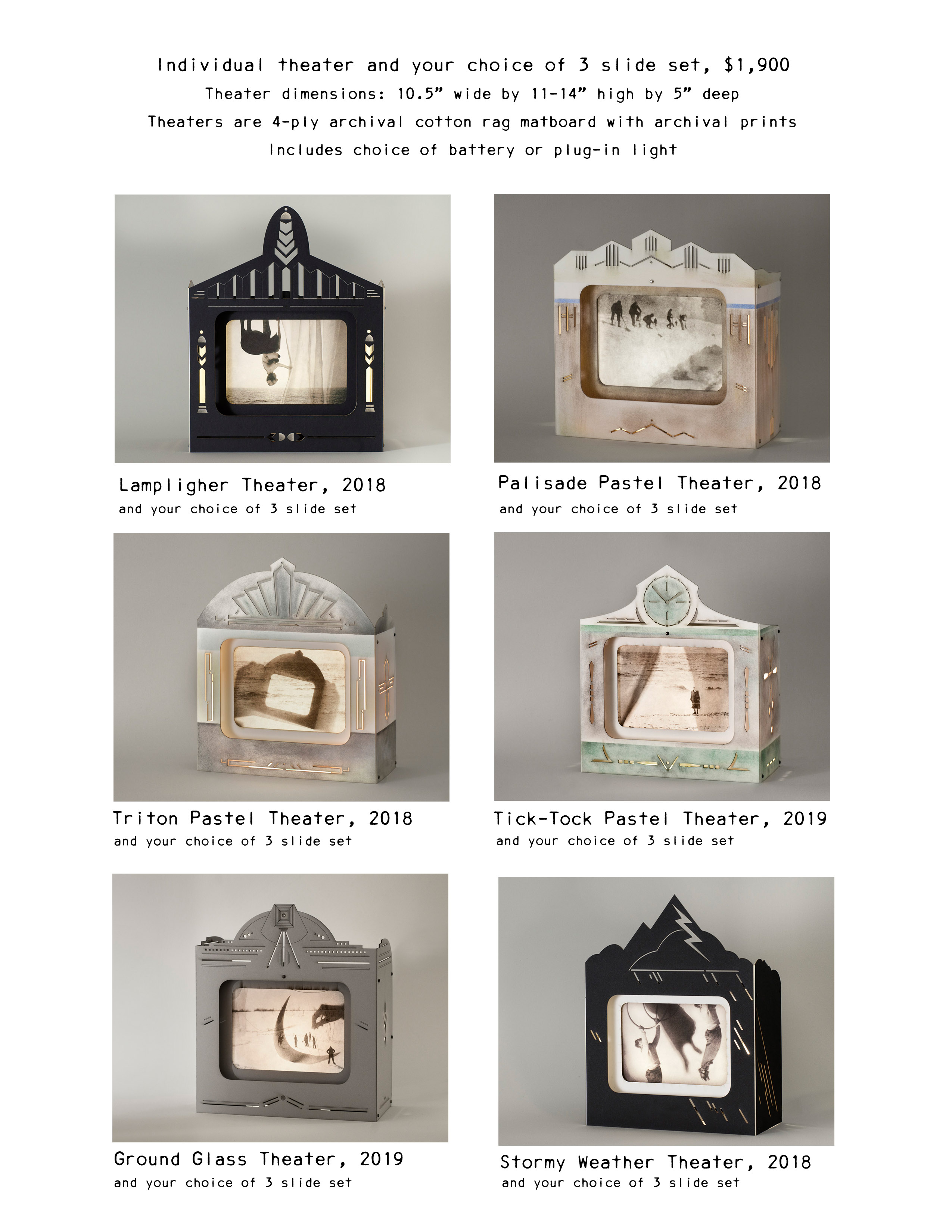 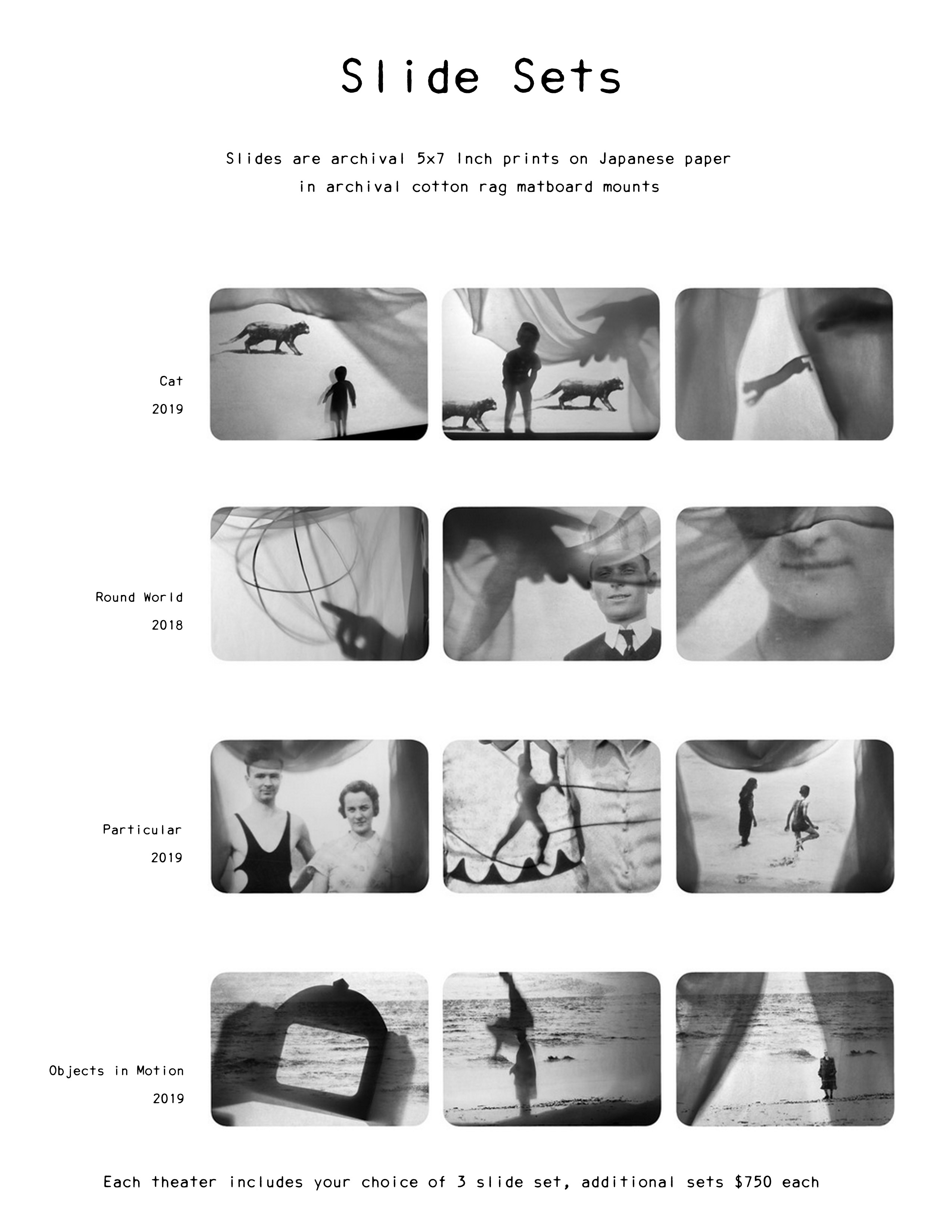 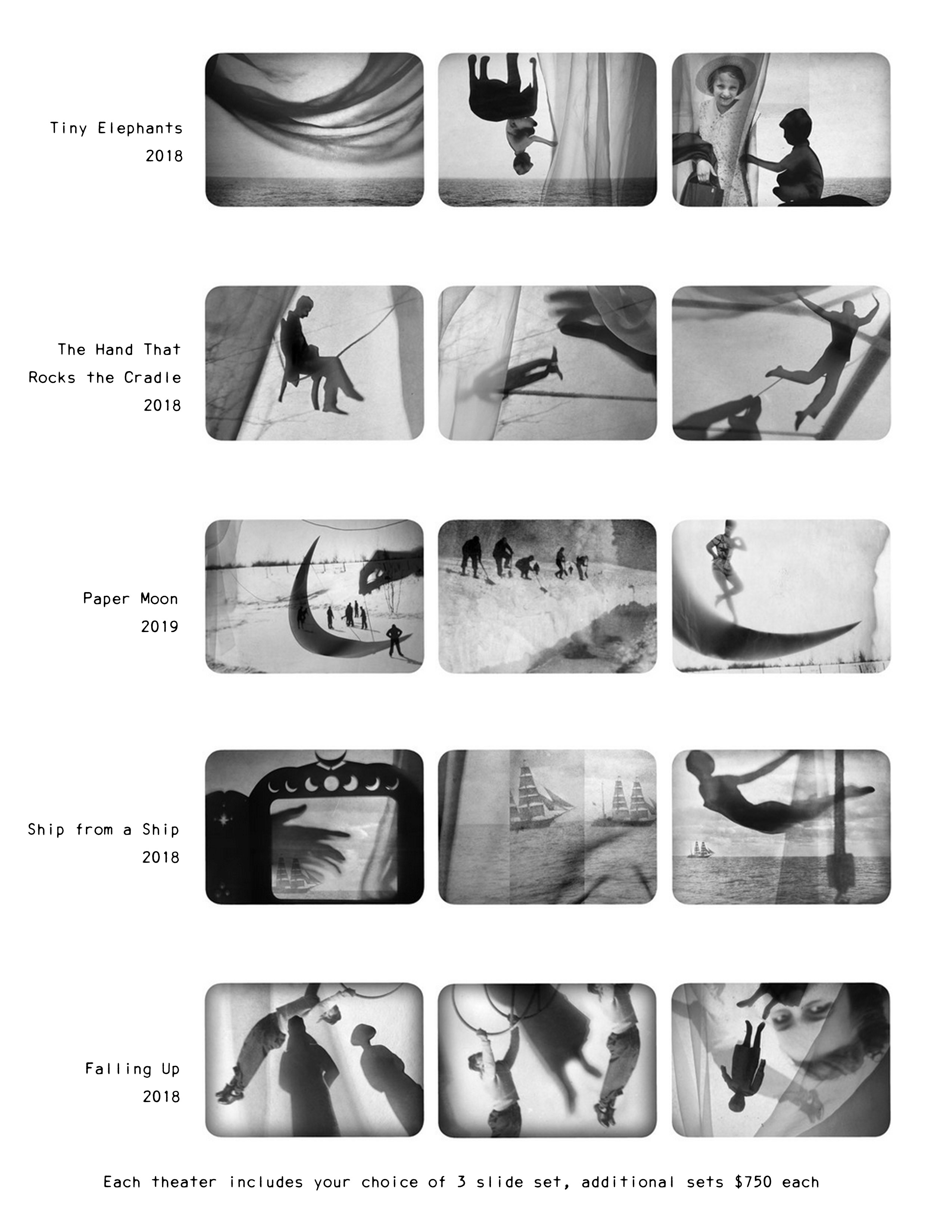 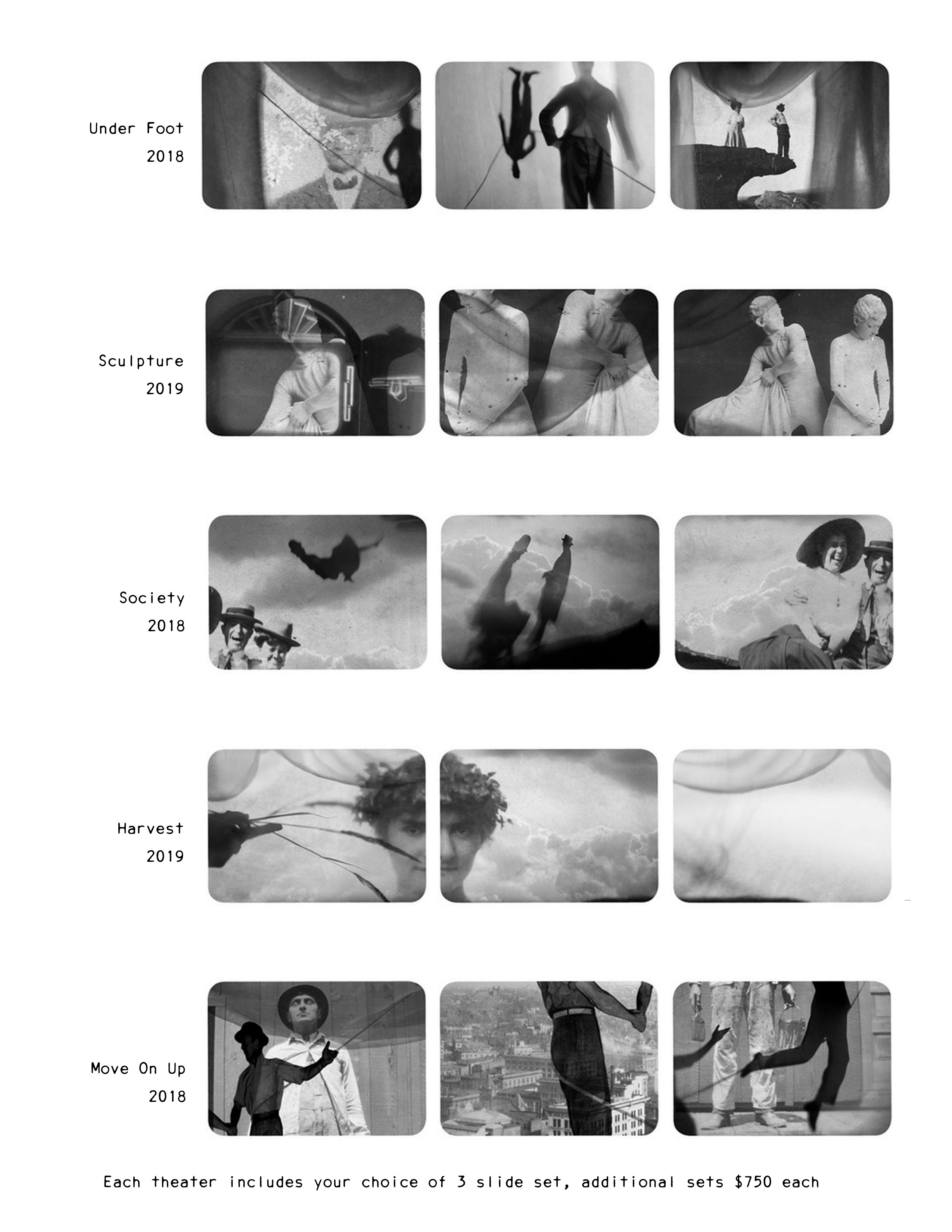 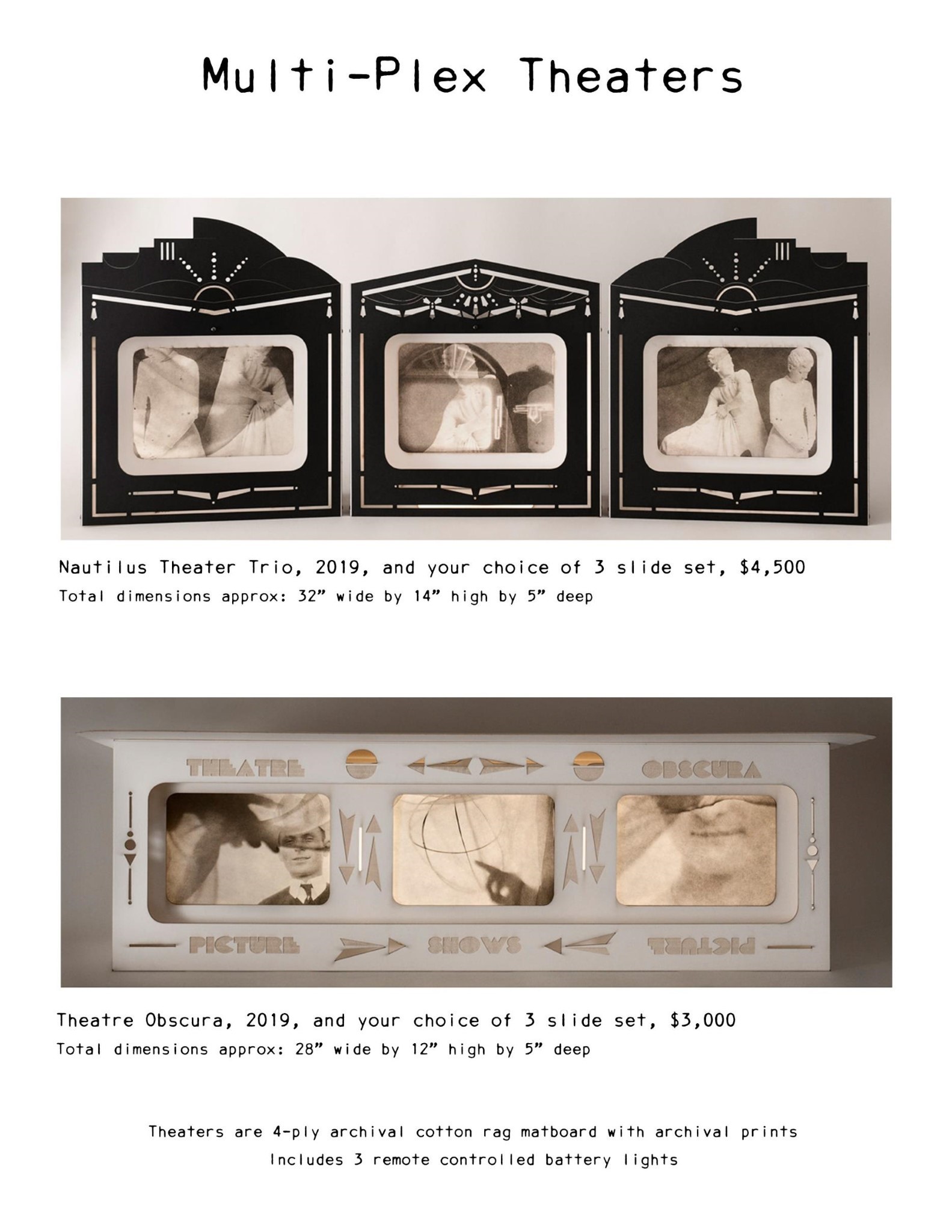 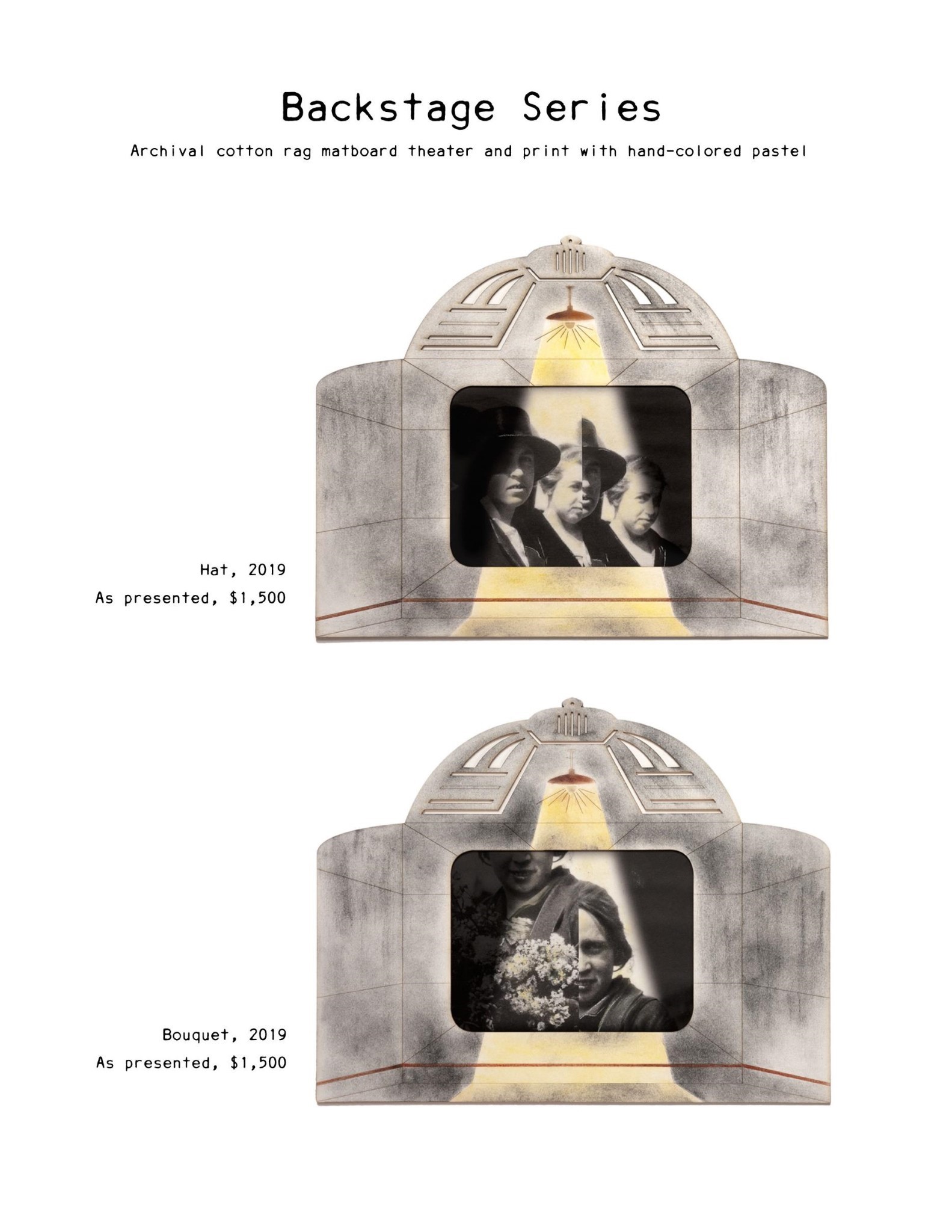 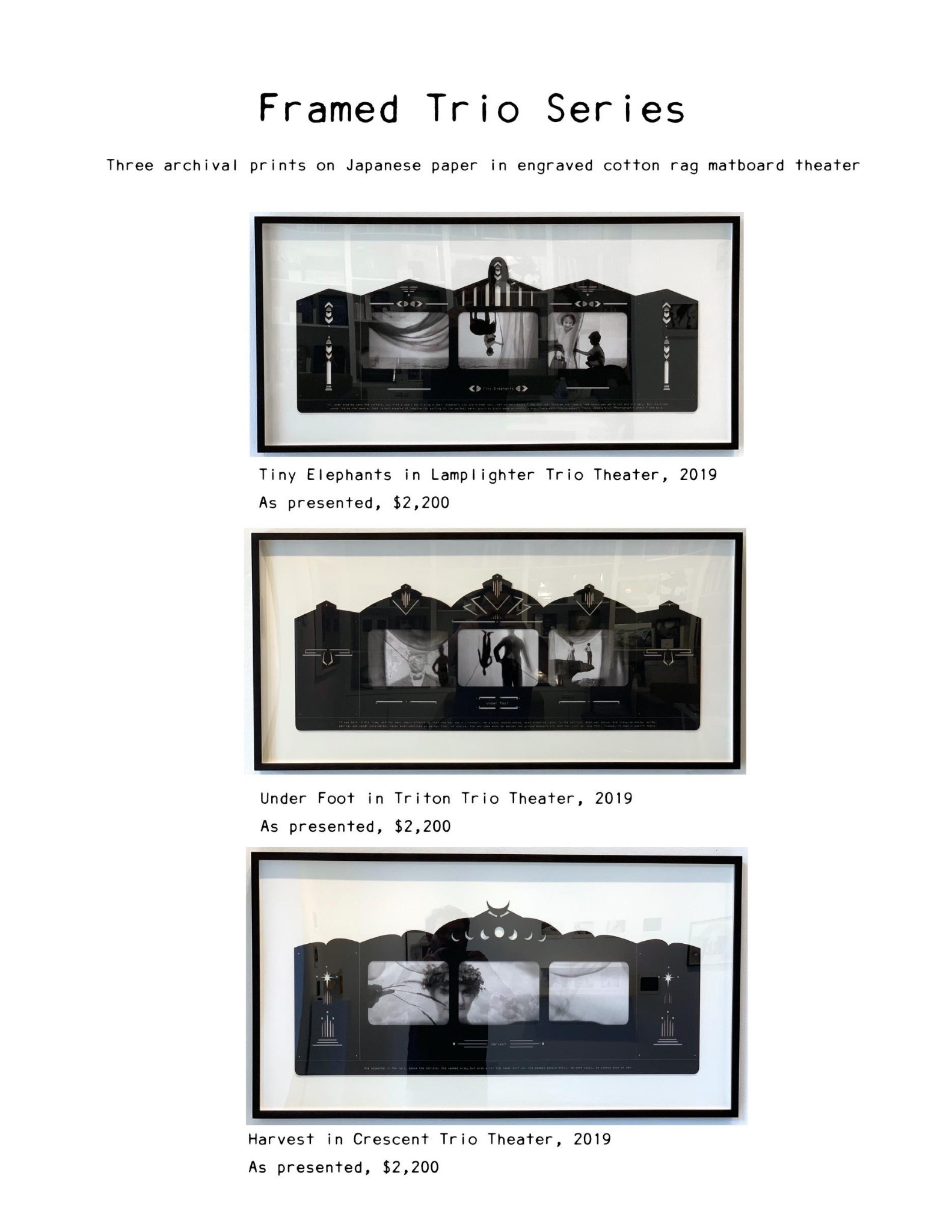 I grew-up going to the movies almost every week at the Stanford Theater in Palo Alto, CA—a restored Art Deco movie palace built in 1925. Showing only films from Hollywood’s Golden Age (with an organ performance at intermission between double features), I munched my popcorn and raisinets while memorizing Bogart and Bacall. This immersion in glorious black and white movies I consider my introduction to photography, and Ghost Light Theaters is an homage to that formative experience. Although I work with still photographs, my love of moving pictures influences my work—a single snapshot sets me to wondering what the story is? What frames came before? What happened next? For me, Ghost Light bridges the space between the decisive moment of a single photograph and the extended gaze of a movie—how can photography be both?

I’ve always loved this Christopher Isherwood quote from Goodbye to Berlin: “I am a camera with its shutter open, quite passive, recording, not thinking. Recording the man shaving at the window opposite and the woman in the kimono washing her hair. Some day, all this will have to be developed, carefully printed, fixed.” A theater is a lot like a camera, they are both dark spaces for holding pictures. I like to think that within both spaces, pictures take on a life of their own.

For purchases or further inquiries email us at gallery@catherinecouturier.com or call at (713) 524. 5070