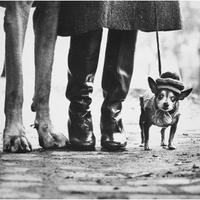 Born on July 26, 1928 in Paris, Elliott Erwitt spent his childhood in Milan. His interest in photography began while he was a teenager living in Hollywood. Elliott Erwitt was invited to join Magnum Photos in 1953 and has been a member of the prestigious agency ever since, serving several terms as its president. Elliott Erwitt has had solo exhibitions in numerous museums and galleries around the world including the Museum of Modern Art, the Smithsonian Institution, the Art Institute of Chicago, Zurich's Kunsthaus and Cologne's Photokina.