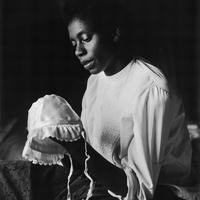 When I began working in the 1940s, few women were doing magazine photography in a field that was almost exclusively male. I started as a “girl” mail room boy at Acme Newspictures (later UPI) and soon after was receiving assignments from Business Week, This Week, Collier's, Life, Fortune and other major publications.

As I progressed from box camera to Speed Graphic (my first professional camera), and then to a Rolleiflex, I stopped thinking about the mechanics of film speed, f-stops, shutter speed, and began focusing on subject matter that interested me. What interested me so much were ordinary people and their everyday activities. Early on, I had documented children's games and unusual architectural details, in my own Bronx neighborhood. I decided to expand, to go elsewhere, taking the subway to Harlem, Chinatown, and lower Manhattan, exploring those neighborhoods and looking for photos.

Wearing the camera trumped my shyness. It enabled me to talk to complete strangers hearing their stories, satisfying the strong curiosity to know more about them. That curiosity, which I've had since childhood (and happily still have today) has enriched my experiences with people. Usually, conversation preceded the photo, but it was alright with my subjects if I shot first. I wasn't hiding. I wasn't threatening. I wore saddle shoes with bobby socks.

Body postures, expressions, clothing, work instruments, and especially light and its effect on the scene were elements which caught my attention. Whatever the subject, I felt very strongly that I needed to take the picture. The feeling was very compelling. I was thrilled with late afternoon cross lighting. I was filled with the excitement of my discoveries in my photos. Looking at the contact sheets, just a few days later, evoked the feelings and memories of the people I had met. I did not consciously think about why I wanted the photo at that moment except that it pleased something within me. I have thought about this many years later as a certain synchrony of heart, eye and brain.

I became a member of the Photo League in 1946. I considered myself a documentary photographer and the League's philosophy of honest photography appealed to me. I also began to understand the power of photos to help improve the social order by showing the conditions under which many people lived and worked. Even after leaving the League the following year, I continued to emphasize visual and social realities in my straightforward photographs. Fortunately, I never had an assignment where an editor asked me to negatively distort a story.

Beginning with my earliest photos seeing New York City with my feet, and in whatever part of the country I was in, I continued my own walkabout, learning the area, engaging my subject, listening and respecting their dignity. This continued to be my approach when taking photos. My photographs depicted daily life in America's modern metropolitan centers, including Chicago, Los Angeles, and New York.

Today, my work can be found in the permanent collections of museums as well as in private collections.