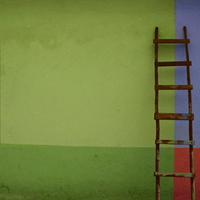 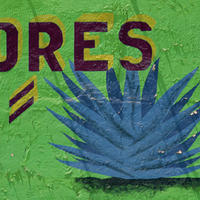 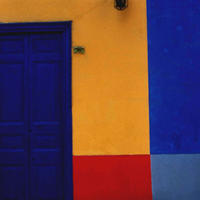 Jeffrey Becom comes to his art as a photographer and painter with formal training as an architect. For him these three pursuits ignite one passion: painted walls. The traditional painted façades of vernacular architecture around the globe offer this inveterate traveler subject and palette from which to derive his own artwork while he, in turn, documents their history, mystery and power. Paint then—and specifically color—is Becom’s life’s calling, whether he photographs, paints, or write books about painted color customs, myths and meanings.

For over three decades, Becom’s artistic sensibilities have stood squarely in the colorist realm. Becom has come to find his inspiration in ever-more remote places populated by indigenous, ritual-bound people whose architectural color springs organically from their history, geography and faith. He considers his photographs to be documentary: the colors, subjects and details are captured as found. He has long relied on traditional equipment and materials and printed using traditional wet darkroom techniques. Only very recently has he entered the digital realm and begun producing film-based images as pigment ink prints.

A dozen years pursuing painted color in the lands bordering the Mediterranean Sea were followed by a decade’s search in the lesser-known corners of Mexico and Central America to unravel the Maya’s enduring color cosmology. Then in 2002 Becom unfolded his map of South America. His search began in Peru, and so far he has wandered no further through South America. In between trips to the Andean Highlands, he has returned to Mexico and Guatemala again and again.

In the winter of 2009, Becom released a new series of film-based images from Northern India and Kashmir as pigment ink prints on German etching paper. The Weston Gallery in Carmel mounted the inaugural exhibition of this work, followed by shows scheduled at Verve Gallery of Photography in Santa Fe and John Cleary Gallery in Houston.

“It was only a matter of time before I turned my camera to the subcontinent of Asia,” says Becom. “After all, India is synonymous with brilliant colors, myriad faiths and some of the earliest societies on earth. Color and faith profoundly envelop Indian life on all levels. I worked mainly in small towns and villages located well off the tourist routes where color and religious ritual are most deeply entwined and intact. I call this first series of images Painted Shadows, because while the painted colors and belief systems of India are potent and pervasive, my understanding of Eastern cultural traditions is necessarily obscured by my Western mindset. These images reveal glimpses—enduring mirages—in the mountains, dust and sand.”

Retablos is based on the nineteenth century Latin American religious paintings on metal plates. When Becom’s color work in Mesoamerica began focusing more and more on places and objects of faith and devotion, he fused these interests to create this unique iconography on copper. Becom’s Monterey County-based friends portray the parts of the saints and sinners in his studio-directed tableaux vivants. The resulting tintypes pay tribute to art history and photographic history alike.

The Full Moon series is produced from an anonymous, antique 20x20 inch paper negative discovered in an Arizona thrift shop. When Becom saw an early silver gelatin test print, he immediately recognized that this image of the moon would make a perfect subject for a large-scale tintype, a medium especially well suited to reveal the rich blacks and subtle, detailed grays of the moon’s topography. Becom also appreciated the fact that the paper negative itself was contemporaneous with the era of tintype photography. With the paper negative owner’s permission, long-time darkroom collaborators Becom and Corey Allen made a contact positive and then used this to produce tintypes on copper. Each of the ten plates in this series is unique because the tintype process is inherently unpredictable, resulting in variations of color, density and surface imperfections, all of which add to its handcrafted finish as well as its individuality within the series.

A recent Jeffrey Becom exhibition in the Mora Chapel of the Carmel Mission again married his interest in the architecture of faith by documenting the five folk-baroque mission churches that were established in Central Mexico’s rugged Sierra Gorda mountains by Father Junípero Serra nearly two decades before this Franciscan missionary founded the first mission church in California. Becom’s photographs reflect his long fascination with the cultural shards of pre-Conquest belief that hold their own through color and symbols alongside Catholic saints and stories on the exuberantly ornamented retablo façades of these extraordinary monuments.

Becom is also a writer, traveler, designer and visual anthropologist.  With his partner, Sally Aberg, he has authored two award-winning books, Mediterranean Color and Maya Color:  The Painted Villages of Mesoamerica (both from Abbeville Press, New York, 1990 and 1997).  He is the subject of an hour-long PBS / BBC documentary entitled For the Colors, A Journey Through Italy (soon available for purchase on DVD).  Becom’s work is held in private and public collections worldwide and represented by ten fine art photography galleries across the country.