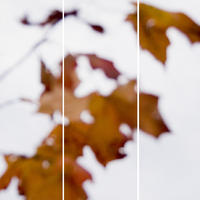 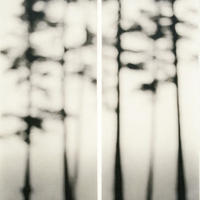 A Sojourn in Seasons 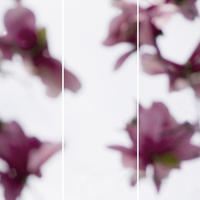 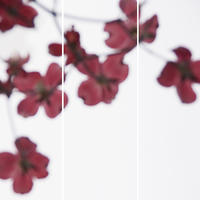 Till It's Time To Go

Jeri Eisenberg works primarily with non-traditional and alternative photo-based techniques. She represses or subverts traditional photography's emphasis on the representational qualities of the medium, and emphasizes instead the medium's expressive nature. She employs a strong sense of materiality and seductive surfaces in her work, to evoke sense memories and visceral connections. Her work steadfastly serves as an affirmation of beauty in the everyday natural world, but is tinged with the bittersweet - a reminder of the temporal condition, and an elegy for life.

Eisenberg's long-term series, 'A Sojourn in Seasons', consists of five chapters - one in black and white and four seasonal chapters in color. The large-scale, abstracted images of the treed landscape in this series are captured with an oversized pinhole or defocused lens. The images are usually segmented and presented as diptychs, triptychs or quads, printed on long panels of Japanese Kozo paper and infused with encaustic medium. The final presentation of translucent panels hangs from acrylic bars with magnets, floating off the wall, casting shadows, and moving gently with air currents in a room. Eisenberg began this series as her father was losing both his vision and his memory. As the images fade in and out of recognizable form, they echo our ephemeral grasp on life.