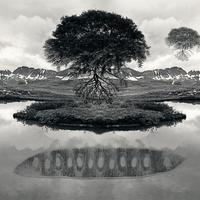 Born in Detroit on June 11, 1934, Jerry Uelsmann received his B.F.A. degree at the Rochester Institute of Technology in 1957 and his M.S. and M.F.A. at IndianaUniversity in 1960. He began teaching photography at the University of Florida in Gainesville in 1960 (“my first job offer”). He became a graduate research professor of art at the university in 1974, and is now retired from teaching. He lives in Gainesville, Florida.