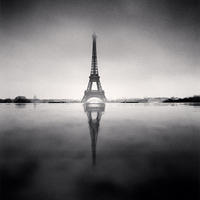 British photographer Michael Kenna (1953-present) is best known for his black-and-white landscape photography in which he often utilizes drawn-out exposure times, some up to 10 hours in length. Most of Michael Kenna’s photography is taken at dawn or at night, and he has commented that "you can't always see what's otherwise noticeable during the day … with long exposures you can photograph what the human eye is incapable of seeing." He cites fellow British photographer Bill Brandt as a primary influence; in fact, after Brandt died in 1983, Michael Kenna paid tribute by visiting and photographing a number of places featured in Brandt's own work. Michael Kenna has also stated that he is greatly inspired by the landscapes of Japan, and he has photographed almost the entire country-the results of which were published in a book named after the nation. In a similar vein of influence, Michael Kenna has stated that he thinks of his work as "more like haiku rather than prose."

His work has been shown at the Tacoma Art Museum, 2012; Moscow Museum of Modern Art, 2011; Palazzo Magnani Museum in Reggio Emilia, Italy, 2010; and Bibliothèque Nationale de France in 2009. Kenna's photographs are included in many public collections including the National Gallery of Art, Washington, D.C.; the San Francisco Museum of Modern Art; the Shanghai Art Museum; the Tokyo Metropolitan Museum of Photography; the Museum of Decorative Arts, Prague; and the Victoria and Albert Museum, London. Born in Widnes, England in 1953, Kenna currently lives and works in Seattle, Washington.