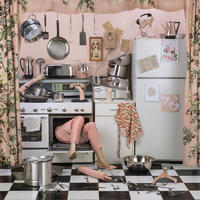 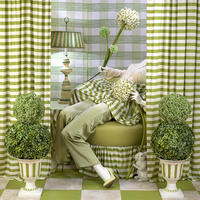 Patty Carroll has been known for her use of highly intense, saturated color photographs since the 1970’s. Her most recent project, “Anonymous Women,” consists of a 3-part series of studio installations made for the camera, addressing women and their complicated relationships with domesticity. By camouflaging the figure in drapery and/or domestic objects, Carroll creates a dark and humorous game of hide-and-seek between her viewers and the Anonymous Woman. The photographs are published as a monograph, Anonymous Women, officially released in January, 2017 by Daylight Books.

The Anonymous Woman series has been exhibited internationally and has won multiple awards including Carroll being acknowledged as one of Photolucida’s “Top 50” in 2104. Her work has been featured in prestigious blogs and international magazines such as the Huffington Post, The Cut, Ain’t Bad Magazine, and BJP in Britain. Her work has been shown internationally in many one-person exhibits in China and Europe, as well as the USA. (White Box Museum, Beijing, Art Institute of Chicago, Royal Photographic Society, Bath, England, among others.) She has participated in over 100 group exhibitions nationally and internationally, and her work is included in many public and private collections. After teaching photography for many years, Carroll has enthusiastically returned to the studio in order to delight viewers with her playful critique of home and excess. She is currently Artist in Residence at Studios Inc. in Kansas City, Missouri.