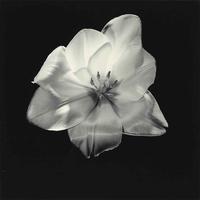 Robert Mapplethorpe was born in 1946 in Floral Park, Queens. In the 1970s, Robert Mapplethorpe and musician, poet, and artist Patti Smith lived together in New York’s infamous Chelsea Hotel where he started shooting Polaroids to use in his collages. Drawn to photography, Mapplethorpe got a Hasselblad medium-format camera and began taking pictures of his friends and acquaintances—artists, musicians, socialites, pornographic film stars, and members of the gay S & M underground.

In 1986, he was diagnosed with AIDS. Despite his illness, he accelerated his creative efforts, broadened the scope of his photographic inquiry, and accepted increasingly challenging commissions. The Whitney Museum of American Art mounted his first major American museum retrospective in 1988, one year before his death in 1989.

His vast, provocative, and powerful body of work has established him as one of the most important artists of the twentieth century. Today Mapplethorpe is represented by galleries in North and South America and Europe and his work can be found in the collections of major museums around the world.