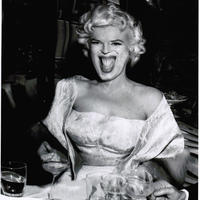 As legend tells it, Arthur Fellig (1899 - 1968) earned the nickname Weegee during his early career as a freelance press photographer in New York City. His apparent sixth sense for crime often led him to a scene well ahead of the police. Observers likened this sense, actually derived from tuning his radio to the police frequency, to the Ouija board, the popular fortune-telling game. Spelling it phonetically, Fellig took Weegee as his professional name.

With his subjects ranging from wild-eyed adolescent onlookers at a late night gangland slaying to glassy-eyed starlets at Hollywood movie premieres, Weegee could be considered one of the first ambulance chasers. He was as flamboyant as some of his subjects, creating his own mythology, reveling in his own notoriety as well as that of his subjects, and even stamping the backs of his pictures with "Credit Photo by Weegee the Famous."