Welcome to 2023! Let’s all work toward a happy, safe, healthy, rewarding year for ourselves and everyone around us. Resurgent COVID, political strife, and international conflicts may fill the headlines, but the Museum remains a place to delight the eye, stimulate the mind, and soothe the soul.

We were touched to read an Instagram post by photographer Dana Scruggs, who visited shortly before Christmas to see her self-portrait—purchased at Photo Forum Vote Night 2021—on view as part of the current installation of “A History of Photography” and to tour the Museum with Lisa Volpe. With the artist’s permission, I copy the text of her post here:

Yesterday, I touched down in Houston for 24 hours to see my self-portrait,

which was acquired by The Museum of Fine Arts, Houston, last year, and is

currently on view. Walking into the gallery and discovering that my image is

the first thing that people see when they enter was jarring and powerful. I

cried. As an artist, I’m not used to seeing myself as the subject being gazed

upon. The image was also a reminder of how far I’ve come, not only as an

artist - but as a human being. The fact that an image that I made of myself is

the life that I have. And that, despite everything I’ve lived through, I never fully

gave up on myself. This year has had a lot of ups and downs for me. I’ve

This was the reminder that I needed. Who I am and what I’m capable of is

Undeniable. Thank you to @mfahouston for this honor and for the incredible

private tour of the museum and its archives.

It’s wonderful to know that our exhibitions and installations mean so much, not only to our visitors, but also to the artists whose work we collect and display. Thank you to our Photo Forum members and all our supporters for helping to make this and other memorable moments happen.

Before telling you about some of the remarkable acquisitions we’ve made recently, I want to put a few things on your calendar: 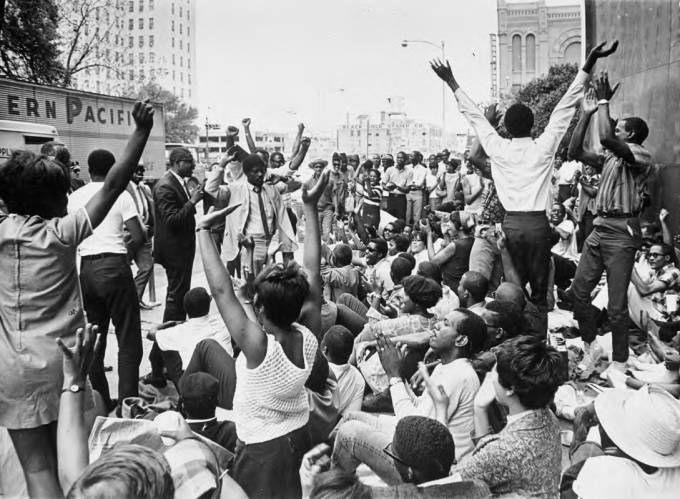 The year 2022 ended with a flurry of important acquisitions, both gifts and purchases. Here are a few of the highlights, from oldest to newest: 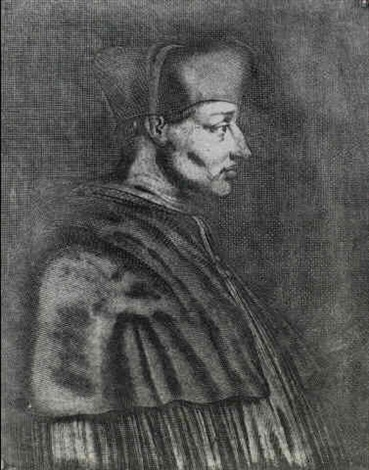 Among the first illustrations in every photohistory book, Nicéphore Niépce’s photogravure copy of an engraved portrait of the Cardinal d’Amboise dates to 1826—three years before Niépce teamed up with Louis Daguerre, and more than a dozen years before the world at large learned of the existence of photography. It’s an important step in the invention of photography and of photomechanical reproduction, and it’s a wonderful addition to the MFAH photography collection as a gift of Michael S. Sachs. Niépce began with Isaac Briot’s 17th-century engraving of Georges d’Amboise, Cardinal and Archbishop of Reims, the frontispiece to Michel Baudier’s Histoire de l’Administration du Cardinal d’Amboise (Paris: Pierre Rocolet, 1634), an example of which Michael previously donated to MFAH and is held as a rare book in the Museum’s Hirsch Library. Double thanks to you, Michael! In 1849, two young French writers, Maxime Du Camp and Gustave Flaubert left Paris to travel down the Nile, enjoy local color, and seek adventure. Before setting out, Du Camp learned photography from Gustave Le Gray and secured a government commission to bring back views of ancient monuments in Egypt and the Holy Land. The album that he produced upon his return, Égypte, Nubie, Palestine et Syrie: dessins photographiques recueillis pendant les années 1849, 1850 et 1851, published in 1852, contained 125 photographs. In addition to its importance as the first sustained photographic survey of Egypt and its antiquities, the publication represents a key milestone in the history of the photographically illustrated book, so we are doubly pleased to have purchased a beautiful copy as part of our effort to build upon the surviving core of the Manfred Heiting Book Collection. 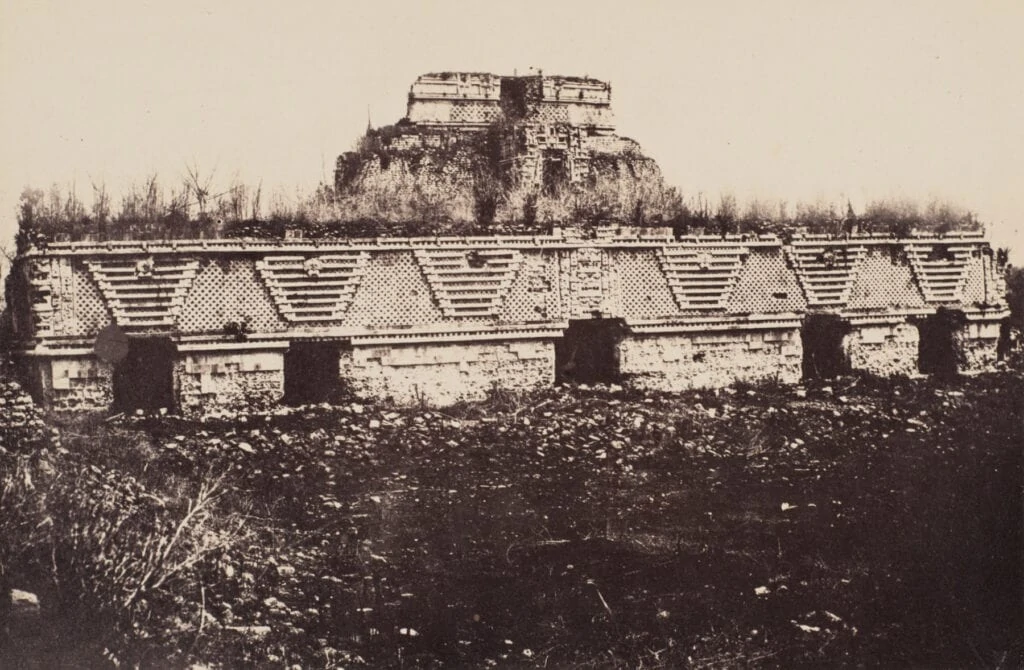 While living in New Orleans in the early 1850s, French-born Désiré Charnay became fascinated by descriptions and illustrations of ancient Maya ruins and determined to set off on his own exploration of the territory. He returned to Paris briefly, learned photography, secured an official commission from the French Ministry of Public Instruction (similar to Du Camp’s), and set off for Mexico in November 1857 with two tons of equipment and supplies. By April 1858 he had established a studio in Mexico City and over the next two-and-a-half years photographed the city’s colonial monuments and many of the principal ancient sites of the Yucatan. Like Du Camp in Egypt, Charnay’s photographs are the first sustained photographic survey of Mexico’s Maya sites including Chichen Itza, Mitla, Uxmal, Izamal, and Palenque, many showing the ancient structures still half-buried and engulfed in jungle vegetation. In December, we acquired twenty prints from Charnay’s two series, later published as Album fotografico Mexicano and Cite?s et ruines ame?ricaines. In addition to their place within the history of photography, Charnay’s photographs are a welcome addition to the MFAH collection given our strong ties to Latin America and exceptional collection of ancient art of the Americas. 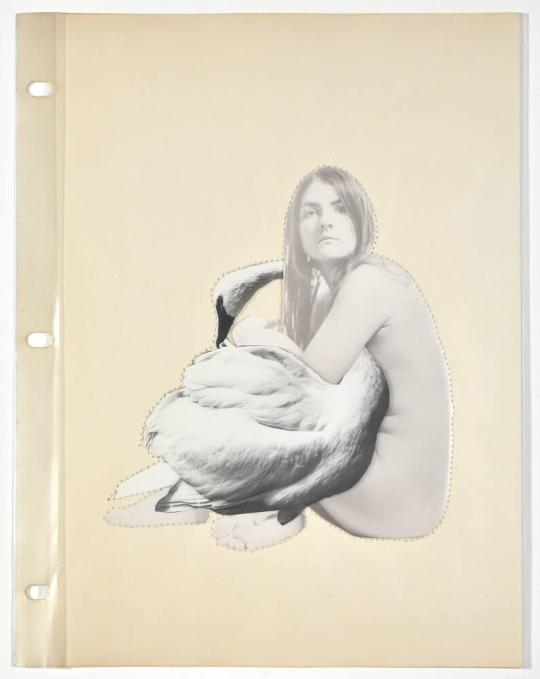 Since the late 1960s, Bea Nettles has explored the narrative potential of photography through constructed images often made with alternative photographic processes. Her work has inspired generations of photographers to think beyond a simple capture, and tackle more experimental approaches to art-making. While her work embraces a far-reaching list of elements—fabric, stitching, book format, applied color, and hand?coated emulsions—her imagery and meaning is found closer to home, referencing key stages in the lives of women and motifs that draw upon mythology, family, landscape, dreams, and the passage of time. The Museum recently acquired B. and the Birds (1970-71), a unique binder of collaged self-portraits and images of birds, elaborated with hand-painting and machine-stitching. With the Museum’s purchase, the artist generously donated a further eight works made between 1970 and 2005. Thank you, Bea! Houston native and longtime MFAH supporter Gay Block has donated 179 photographs constituting a “key set” of images from her career, selected by us in consultation with the artist. The group includes the full contents of her two best-known series: Camp Girls (as both vintage prints of young women at Camp Pinecliffe in 1981 and as diptychs paired with their portraits 25 years later); and Rescuers, portraits and interviews of Christians who risked their lives to rescue Jews during the Holocaust. The “key set” also includes examples of Block’s early portrait work in the Houston Jewish community; suntanned “bubbies and zeydes” of Miami’s South Beach; and portraits of H.E.B. employees at work and at home. Block’s more expansive archive will go to the University of Houston. 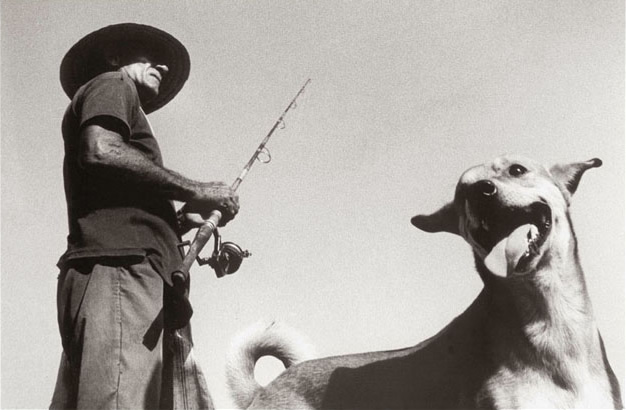 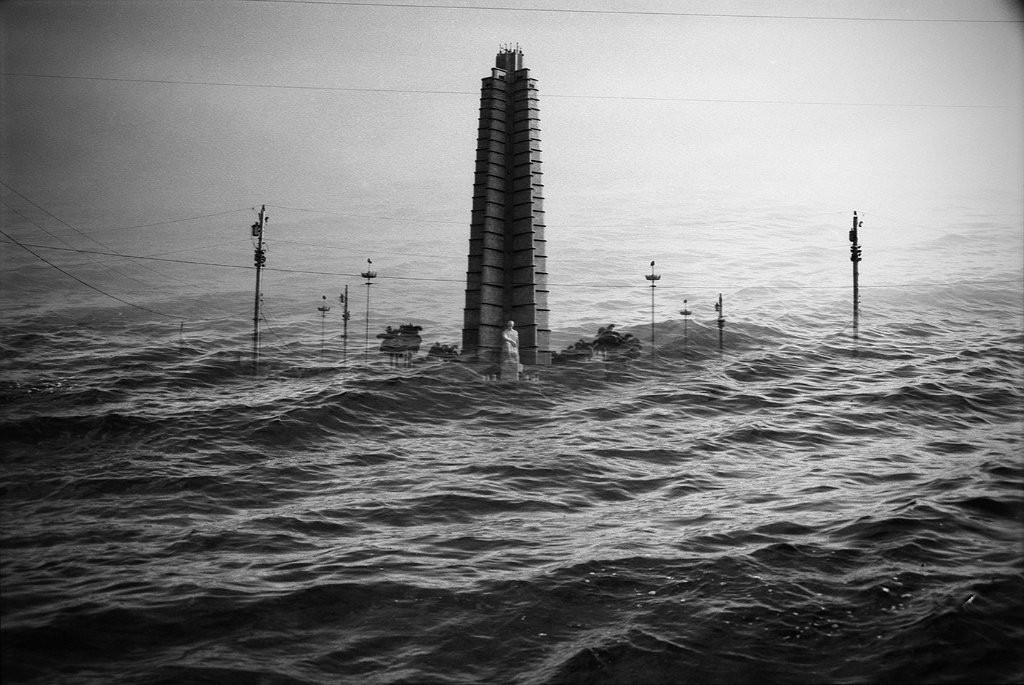 You’ll be hearing much more about this in the future as we prepare an exhibition and catalogue of Cuban photography from the past fifty years, drawing a bit on our existing collection, but relying heavily on a superb collection assembled over the past two decades by Chicagoan Madeleine P. Plonsker. Traveling to Havana several times a year beginning in the early 2000s, Plonsker avoided the state-sponsored galleries and instead forged warm relationships with photographers, particularly those who had produced personal and subtly political artwork during the “Special Period,” the 1990s and early 2000s when the collapse of the Soviet Union plunged Cuba in an especially dire economic period. In more recent years, Plonsker also found and supported a younger generation of photographers, some more openly tackling issues of identity, race, sexuality, class, and political opposition to the government. With more than 300 photographs and a group of artist books and small-scale sculptures, the acquisition of the Plonsker Collection by purchase and gift establishes the MFAH as the strongest museum collection of contemporary Cuban photography anywhere, including Cuba. We are indebted to Madeleine and her husband Harvey also for their support of our 2024 exhibition and catalogue, including the funding of a research associate position, held by Raquel Carrera, my partner on the project. 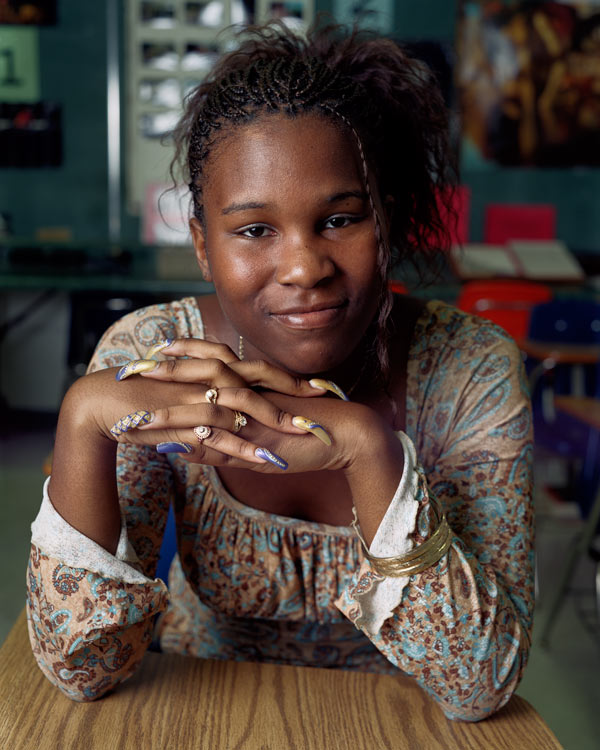 Last spring’s deeply moving exhibition of work by Dawoud Bey revealed an artist of exceptional aesthetic sensitivity and a profound sense of humanity. With the Trustees’ support, we have purchased 10 photographs that add to our already strong collection of the artist’s work and include projects not previously represented in our holdings: Bey’s first project, Harlem U.S.A. (1975-78); large prints of Bey’s 4-by-5-inch street portraits (1988-90); Class Pictures (2003-06), his photographs of high-schoolers accompanied by autobiographical texts they wrote; Night Coming Tenderly, Black (2017), his evocation of the Underground Railroad; and his most recent series photographed on plantations along the Mississippi, In This Here Place (2019-20). Along with our existing collection, including many photographs donated by John and Nancy Parsley, and known promised gifts, the MFAH will have an exceptional collection of Bey’s work. 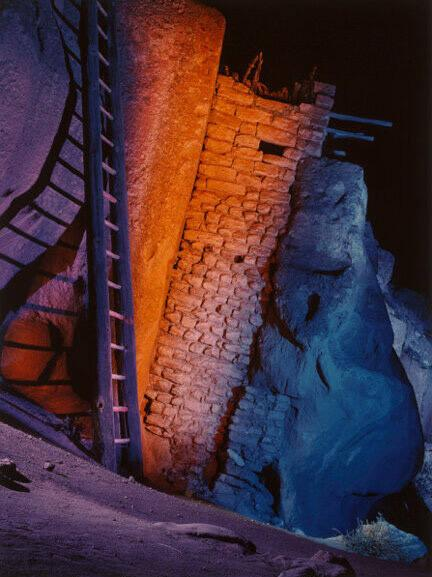 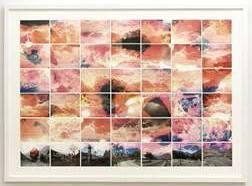 Once again we’ve received an impressive bounty of year-end gifts. John MacMahon continues to enrich our contemporary photography collection with important donations. His gifts this year included works by Rineke Dijkstra, Katy Grannan, Barbara Kasten, Gabriel Orozco, Mariah Robertson, Alec Soth, Yasumasa Morimura, Thomas Joshua Cooper, and James Welling. Dan and Mary Solomon donated 9 artist books by Raymond Meeks, which some of you saw up close at a Photo Forum event on December 1, as well as two 19th-century pieces that will be included in the next “History of Photography” installation. Joan Morgenstern (who, by the way, will be deservedly honored at this year’s HCP benefit on March 2) added works by Bill Brandt, Harry Callahan, Louis Faurer, Lee Friedlander, André Kertész, and Ray Metzker to the more than a thousand photographs she has given or funded since 1986. Charles Dee Mitchell continues to donate powerful and poignant works related to war, the US-Mexico border, political conflict, gun violence, and related topics, this year with 20 works by Kael Alford, Vladyslav Krasnoshchok, Sergiy Lebedynskyy, Sergey Ponomarev, Ada Trillo, Susan Meiselas, Michael Mergen, and Antonio Turok. Artist John Goodman has donated a full set of vintage prints of his signature series, Times Square Gym, along with another 10 works that I selected from other series. Catherine Edelman donated 6 photographs by Jessie Tarbox Beals, Barbara Crane, and Joan Foncuberta. And there was more—a marvelous work by Curtis Mann from Zoe and Joel Dictrow that will go on view in our Kinder Building galleries at the end of this month; a beautiful piece by David Benjamin Sherry, a gift of Joshua Kulkin and Christina Kirby; two photographs by Richard Misrach from Rusty Wortham; an Earlie Hudnall from Margaret Culbertson; a piece by Liz Magic Laser from Elliot Doyle; and a Clarence Kennedy portfolio from the Smith College Library. Thank you to all our amazingly generous donors, those listed here as well as anyone I’ve failed to mention by name. Thank you for believing in the MFAH photography department and for so generously helping to build our collection. 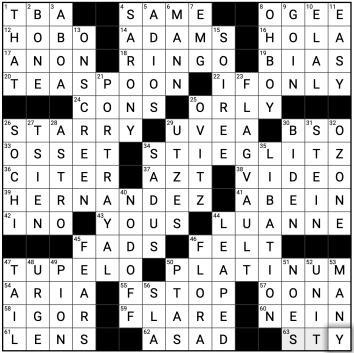 How well did you do?

The solution to my last crossword puzzle is shown here. Burt Nelson gets a shout-out once again as the first to solve the puzzle correctly but, as a previous winner, a shout-out is all he gets (along with my admiration for his crossword abilities.) Instead, the actual winner this time around is our good friend, the longtime Chicago gallerist Cathy Edelman. Well done! Recently retired from the gallery world, Cathy now devotes herself fulltime to the CASE Art Fund, a nonprofit she founded with Anette Skuggedal to raise awareness about children’s human rights through the support and exhibition of photography. Check out the link above.

Warmest wishes to you all for the year ahead,