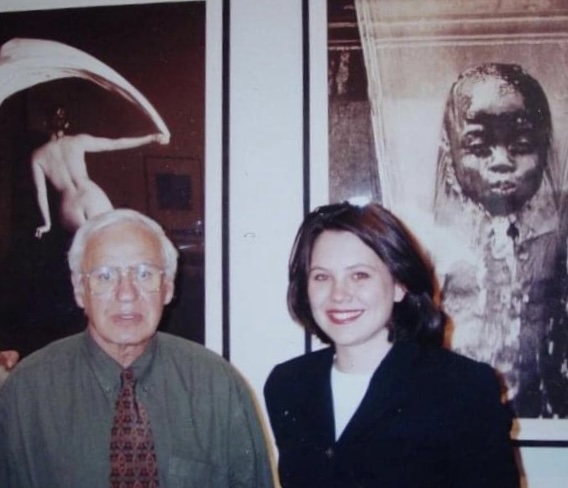 We are very sad to announce the passing of artist George Zimbel. I met George and his fantastic wife Elaine (remind me to tell you about this funny card she used to carry around!) in early 2000 when George had his first show in the gallery, and I always looked forward to spending time with them, be it in person or on the phone. This photo is from that first show which began a friendship I'll never forget.

Photographer George S. Zimbel (b. 1929 Woburn, Massachusetts, USA) died January 9, 2023, in Montreal of natural causes. He was 93. Zimbel was one of the few surviving elders of photography faithful to the legacy of New York's Photo League who in the 1950s imbued their pictures with a personal commitment towards the people and the social landscape they documented.

Zimbel's work is collected by private collectors and major museums throughout the world. He has published four books of photography and was the subject of an award-winning feature documentary about his work in 2016 called "Zimbelism" which toured the film festival circuit internationally.

In addition to photographing street and community life wherever he lived, Zimbel has photographed the famous including Marilyn Monroe, presidents Eisenhower, Kennedy, Nixon, Truman, Prime Minister Pierre Trudeau, The Queen Mother, The Queen and Rene Levesque.

George Zimbel was a regular contributor to major magazines and newspapers including Life, Look, The New York Times and The New Yorker.
He is survived by his four children, Matt, Andrew, Ike and Jodi and nine grandchildren.

Here are a few responses and fond memories we recieved after the news of George's passing broke:

"Sad news about the passing of George. He was an amazing person and always the photographer. He will be missed!"

"I am sorry to hear of George’s passing... I only had limited contact with him but he seemed like a good man."