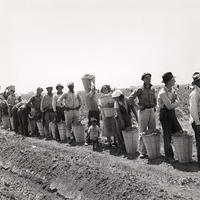 Dorothea Lange was determined to be a photographer before she had a camera. Rather than follow her mother's wishes that she train as a school teacher, Lange apprenticed herself in a series of New York studios, including that of Arnold Genthe. Her plan to travel around the world in 1919 was thwarted when her money was stolen. Stranded in San Francisco, she soon found photographic work and connections to the Bay area camera clubs. But the major direction of her photography, through which she documented the lives of rural American workers, their families, and their living conditions, when she began to see the demonstrations and bread lines of the new poor from her Montgomery Street studio in the 1930s. Together with labor economist Paul Taylor, soon to be her husband, she produced illustrated reports on migrant camps for the State of California, and then the Farm Security Administration in Washington, D.C. Her work in black and white was often selected to represent technical and aesthetic standards of this agency under the direction of Roy Stryker.