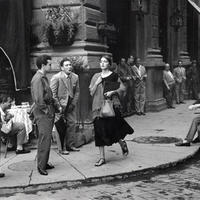 Ruth Orkin was an award-winning photojournalist and filmmaker. Orkin was the only child of Mary Ruby, a silent-film actress, and Samuel Orkin, a manufacturer of toy boats called Orkin Craft. She grew up in Hollywood in the heyday of the 1920s and 1930s. At the age of 10, she received her first camera, a 39 cent Univex. She began by photographing her friends and teachers at school. At 17 years old she took a monumental bicycle trip across the United States from Los Angeles to New York City to see the 1939 World's Fair, and she photographed along the way.

Orkin moved to New York in 1943, where she worked as a nightclub photographer and shot baby pictures by day to buy her first professional camera. She worked for all the major magazines in 1940s, and also went to Tanglewood during the summers to shoot rehearsals. She ended up with many of the worlds' greatest musicians of the time including Leonard Bernstein, Isaac Stern, Aaron Copland, Jascha Heifitz, Serge Koussevitzky and many others.

In 1951, LIFE magazine sent her to Israel with the Israeli Philharmonic. Orkin then went to Italy, and it was in Florence where she met Nina Lee Craig, an art student and fellow American, who became the subject of "American Girl in Italy." The photograph was part of a series originally titled "Don't Be Afraid to Travel Alone" about what they encountered as women traveling alone in Europe after the war. On her return to New York, Orkin married the photographer and filmmaker Morris Engel. Together they produced two feature films, including the classic "Little Fugitive" which was nominated for an Academy Award in 1953. From their New York apartment overlooking Central Park, Orkin photographed marathons, parades, concerts, demonstrations, and the beauty of the changing seasons. These photographs were the subject of two widely acclaimed books, "A World Through My Window" and "More Pictures From My Window." After a long struggle with cancer, Orkin passed away in her apartment, surrounded by her wonderful legacy of photographs with the view of Central Park outside her window.