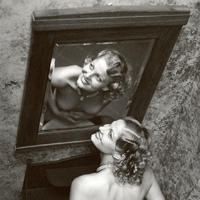 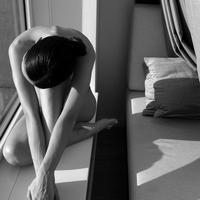 One of the great ironies of globalization is that as people become more connected to technology - email, cell phones, Ipods - they often become less connected to one another.

This growing rift in the social fabric has been duly noted by Croatia's Stanko Abadzic, whose deeply humanistic photographs resonate with wistful regard for a time when people were in tune with each other spiritually and emotionally rather than electronically.

This accounts for the seemingly "old fashioned" aesthetic of his images, many of which, with their geometric composition, sensual atmosphere and telling detail, look as if they could have been made in the 1940s or earlier.

The slightly surreal "Legs Opatija" for example, which playfully skirts the border between reality and fantasy, would not look out of place among the work of the pioneering French photojournalists Abadzic admires. A shared affinity for the likes of Andre Kertesz and Willy Ronis notwithstanding, Abadzic's photographs convey a very contemporary message.

"The faster we live, the less emotion is left in the world. The slower we live, the deeper we feel the world around us," he says. "I am not against globalization in general, but I am against the physical and spiritual uniformity of cities and towns dominated by multinational corporations. Globalization turns us into passive consumers. It is not interested in our creativity or our individuality. We lose our happiness when we lose our sense of identity."

Having been compelled to change countries several times during his life while striving to preserve his spiritual identity helps explain the sense of connection Abadzic celebrates in photographs like "A Circle". Taken during a troubled transitional period in Berlin, the image elegantly evokes a spirit of closeness and cooperation. Yet the modernist juxtaposition of shadow and light - Abadzic's trademark - balances the mood and prevents the image from tipping over into sentimentality.

Abadzic was born in Vukovar, Croatia in 1952. His father, recognizing Stanko's susceptibility to the old world charm of this city on the Danube, presented him with a Russian camera on his 15th birthday. Abadzic taught himself the technical basics while refining his vision by attending exhibitions, studying photography books and watching television and films. He joined a photo club, exhibited his early work, and earned money taking pictures of weddings and soccer clubs. Abadzic subsequently joined the staff of the newspaper Vjesnik as a photojournalist, married and started a family. This tranquil existence, however, was brutally interrupted by the outbreak of Croatia's war of independence in 1991.

“I moved my family to Germany thinking things would soon settle down and that we could move back to Vukovar, but it did not happen," Abadzic recalls. "It was a very difficult period. We did not have any means; we left everything in Vukovar and ran for our lives. I accepted any job I could find: shipping agent, waiter, teacher. The hardest thing was going to the immigration police every three months to extend our visas. Our motto was: think of today, only now exists. After four years we had to leave; they did not want us to get any nearer to the five years required for German citizenship. Because of all that pressure I was rarely able to take photographs."

The dark years of physical and creative displacement ended when Abadzic moved to Prague on a sunny August day in 1995. The warmth of the sun symbolized for Abadzic the city's positive energy. Feeling a sense of rebirth, he began exploring Prague with his medium-format camera, leaving behind the photojournalist and discovering the artist within.

"I slowly peeked behind the curtain, entered old backyars overgrown with Ivy where time had stopped," he says. "I met people who remained original and authentic, people in hurry, people who refused to take part in the extremes of globalization. The more I unveiled Prague, the more I began to experience photography as an art form. The sensation was intense, like a volcanic eruption.

The enigmatic beauty of Prague's ancient streets and cul-de-sacs also helped deepen the sense of misterioso that inhabits so many of Abadzic's images. The furtive pose and voyeuristic overtones of "Curiosity, Prague" transforms a commonplace scene into a Cocteau-like meditation on unconscious urges. The surface objectivity of "A Day When Everything Goes Wrong" is undermined by the visual tension created by the spilled fruit, upended bike and slashing angels of sunlight and shadow. Abadzic's head, heart and spirit had achieved perfect alignment through his photography.

Abadzic moved back to his homeland in 2002, settling in the capital city of Zagreb, but retained his Czech residence permit and returns periodically to Prague. He also photographs extensively on the Croatian island of Krk, site of images such as "Brothers, Baska," which eloquently reference our shared humanity. Abadzic continues to create work that registers a positive outlook despite the difficulties of his past and increasing cynicism currently in fashion.

"The mass media bombard us with images of blood and tears", he states." It's high time we showed interest in beauty and aesthetics, not just in wars and catastrophes. I still believe photography can touch people emotionally. I believe a photograph can be a testimony and a document of its time, and that it can inspire us to talk to each other and make a better world."